I am humbled and honored by the overwhelming support and trust that you, the members of the IAFF, have demonstrated by electing me as your next General Secretary-Treasurer.

As promised during the campaign, I began working immediately to assemble a Senior Transition Team. This team, chaired by senior District Vice President Danny Todd from the 14th District, will ensure a smooth transition as we chart the course for this great union collaboratively with General President-Elect Ed Kelly.

As I informed the IAFF Executive Board earlier this week, I am pleased to announce that Jim Brinkley will serve as my Chief of Operations (COO). Jim currently serves as the Assistant to the General President for Technical Assistance and Information Resources. He is a strong, well-respected and experienced leader with a proven track record of delivering for our members. His in-depth knowledge of IAFF programs, services and administrative and budgeting processes make him the right leader to have by my side during this critical time of transition for our union.

Jim will serve alongside the Senior Transition Team Chair Todd to review all aspects of the General Secretary-Treasurer’s constitutional, financial, legal and ethical responsibilities, ensuring that I fulfill my duties as promised when I took the oath on March 10.

In addition to District Vice President Todd and COO Brinkley, we have assembled a strong, experienced and diverse team of leaders from the IAFF and the public and private sector to serve as the General Secretary-Treasurer Senior Transition Team: 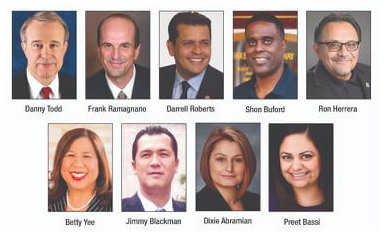 In addition to reviewing internal personnel, processes and resources, the Senior Transition Team will be charged with fulfilling one of my key campaign promises – the development of a General Secretary-Treasurer Field Advisory Committee comprised of IAFF secretary-treasurers and leaders in the field. Additional details on the makeup of this team will be forthcoming.

As directed by me, this highly experienced and diverse Senior Transition Team will work in collaboration with General President-Elect Ed Kelly and his Transition Team with integrity while making sure our union remains strong for decades to come as #OneIAFF.

Let’s get to work. #UniteFightOrganizeToday, General President Edward A. Kelly and General Secretary-Treasurer Frank V. Líma take office, marking a new next chapter in our union’s history and for our 324,000 members across the United States and Canada. #OneIAFF #ReadyToLead @IAFFPresident @IAFFGSTLima

Always impressed about how great our #IAFF members are at what they do. Got a little back seat time this week and an early morning fire. Great work done by @local112. Stay safe and keep fighting. #ONEIAFF #UniteFightOrganize #IAFFGST ... See MoreSee Less

Strong teams make for strong futures. The #IAFF's's is brighter than ever with this group: buff.ly/3rb9FEE. I'm excited to announce our Senior Transition Team. This diverse group will work in collaboration with General President-Elect Ed Kelly and his Transition Team to make sure our union remains strong for decades to come as #OneIAFF #IAFFGST #UniteFightOrganize ... See MoreSee Less

On Monday, General President-Elect Ed “Edzo” Kelly and General Secretary-Treasurer Elect Frank Lima met in Los Angeles to discuss their collective vision of #OneIAFF, a vision that unites all of our members, a vision that puts firefighters and their families first.

During their meeting, President Joe Biden called to thank all of the IAFF members for their support, shared appreciation for keeping their communities safe. and congratulating Edzo and Frankie on their newly elected IAFF offices. #OneIAFF

Sharing with my unending gratitude for both of your leadership and courage in stepping up to this challenge, Edward & Frankie; you fill the huge shoes passed on by my first GP & GST, Al Whitehead & Vinnie Bollon, and like them you represent the entire expanse of America from sea to shining sea, which, given our International nature, is fitting. I salute you each in turn and hold you in the highest esteem.

Documentation strengthens your case for job-related illness. Recording exposures has never been easier. Go to PERonline.org to get started. ... See MoreSee Less